Disclaimer: Please note that I do not own any of the ghouli.net content linked below. My intent here is simply to archive the posts from the website ghouli.net for future reference in case the site disappears or becomes otherwise inaccessible.

Ghouli.net was one of my favorite aspects of Season 11. It was a sort of ARG that tied into the episode Ghouli and also served to give us a glimpse of different aspects of Jackson’s life over the past 17 years, a clever way to fill in some of the blanks when screen time was limited.

As I’m writing this in February 2019, a little over a year after the episode first aired, the website is technically still up, though in a state of disrepair. There are some issues with formatting and missing images, and the “Sightings” image gallery is no longer available at all. Many people are unable to access the site on their devices due to security warnings, likely due to allowing the site’s security certificate to expire. Because of this, even the archived pages are not an accurate visual representation of the site as it originally appeared, though the content remains unchanged. [November 2019 Update: The website is no longer online.]

The site originally appeared nearly identical to the way it looks in the episode itself. The main difference between the posts on the published website and the site as seen in the episode is that some of the posts dates were changed to better align with when the episode actually aired. The site itself was built in WordPress, and as such, also had a mobile version with a slightly different look that we never saw in the show.

Since the site is no longer available, the best resource we have for what it originally looked like is what we see in the episode Ghouli when Mulder and Scully are browsing the site in the coffee shop. Here are some samples: 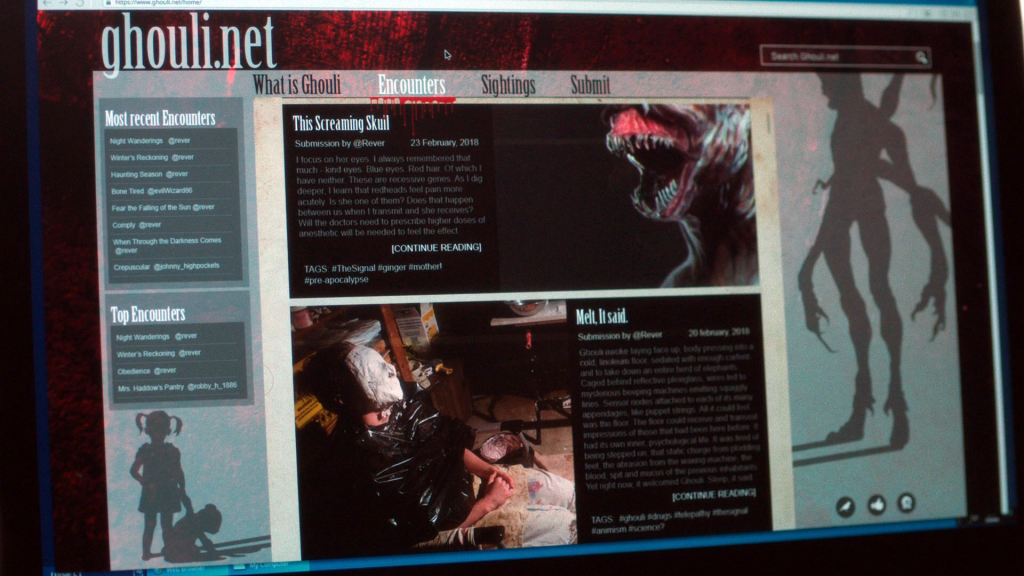 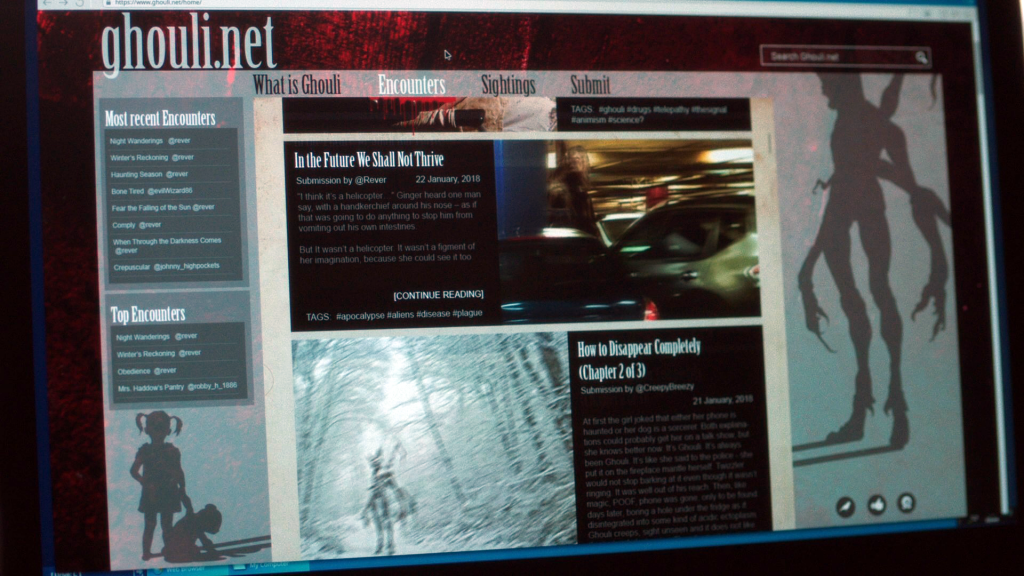 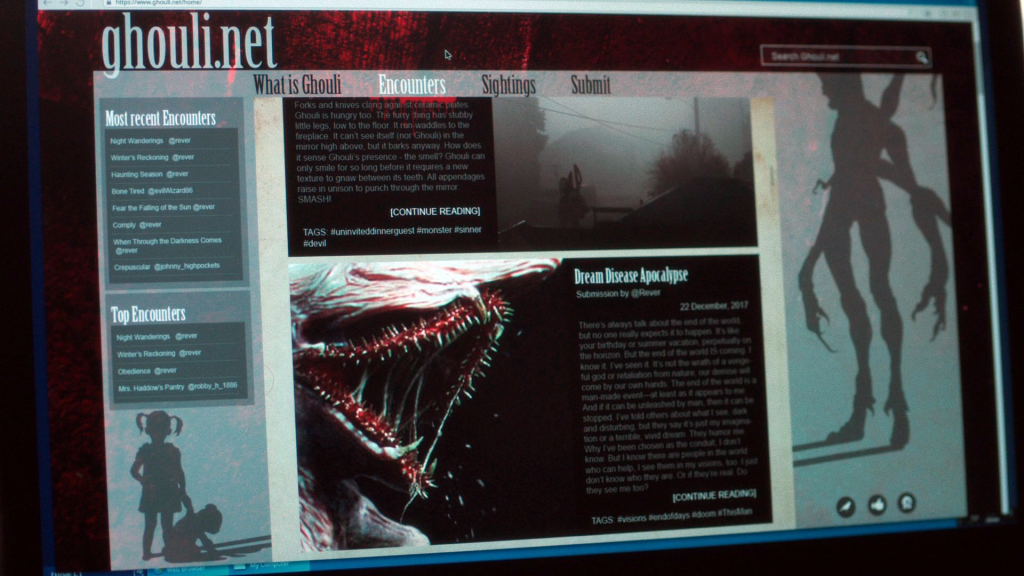 This is a partial screenshot I was able to grab of the site before it went down completely. The placement of the images and preview entries are swapped compared to the episode. I’m unsure if it was originally like this, as this was taken after the site was already experiencing formatting issues. 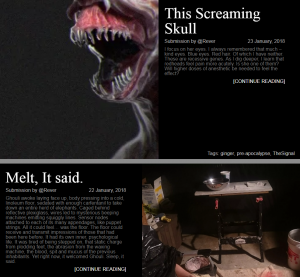 Unfortunately, the Internet Archive isn’t great at archiving WordPress sites. I was able to capture a screenshot of the basic homepage layout from the Internet Archive, but the links are not properly archived. I’ll continue searching the archive for individual pages where I can find them.

Here are a couple of links I was able to grab before the site went down completely, though unfortunately not before it fell into disrepair. The first link shows the general formatting of the Encounters page, though the images are unfortunately missing. The second link is without any formatting but contains the full text of all of the entries.

“Encounters” page with original layout and previews, though missing images.

And finally, here are a couple shots of the mobile version of the site, taken back in January 2018. These are from the body of the post You are the Living Key in a Dying Function. 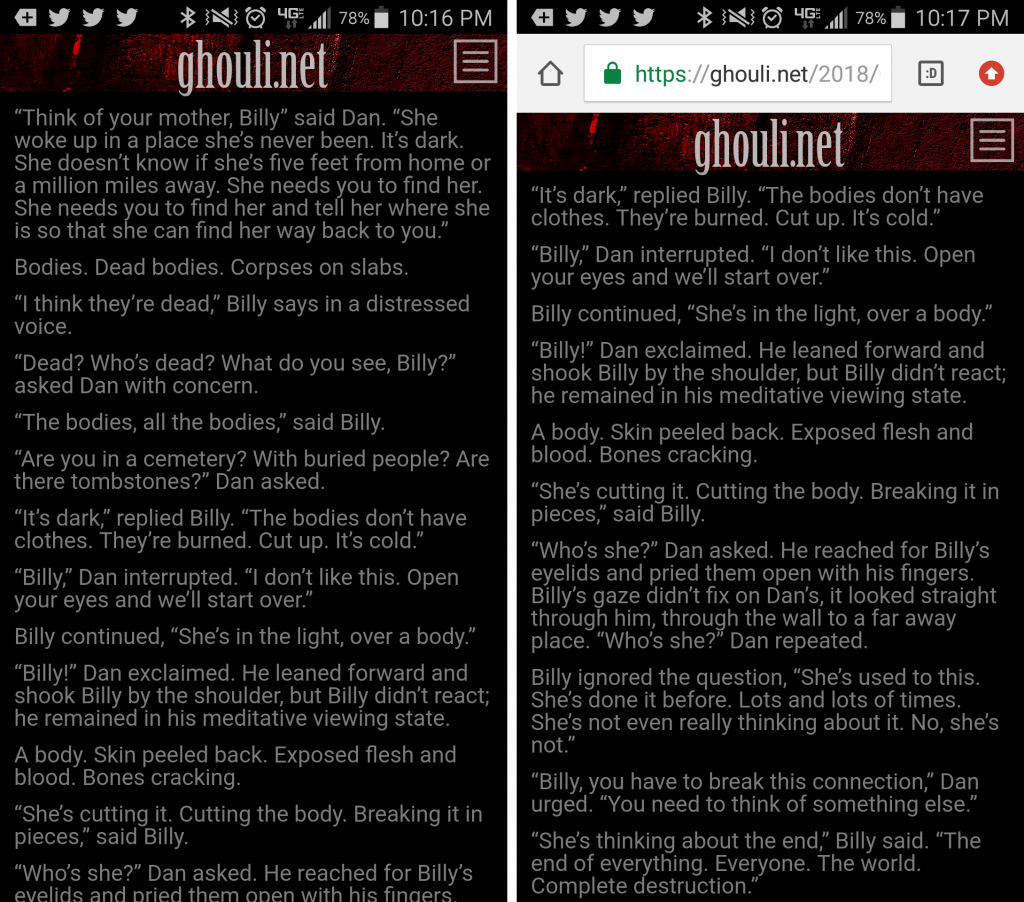 In addition to Jackson’s posts, you can see that other users had also submitted contributions, and the website took this a step farther and actually allowed real-life viewers to submit their own stories and images. You will find these user-submitted posts mixed in with the official entries in the links above. The site also allowed users to comment on all posts. The user-submitted posts are the ones between the January 23rd post “You are the Living Key in a Dying Function” and the March 9th post “Spook.” It’s unclear if there were any official posts mixed in with the user-submitted ones during this time frame.

In addition to this, there are some posts in the “Most Recent Encounters”/”Top Encounters” sections of the site that don’t appear to have a corresponding post on the real-life website, or if they do, the names of the posts were changed. (The “Top Encounters” section was also replaced by “Popular Tags” on the real-life site.) The majority of these posts were attributed to “@rever.” The titles of these unseen @rever posts are:

Here are the entries attributed to “@REVER” on the site. The links should include the full text and comments, however, most of the formatting and images have unfortunately been lost. I may have some of the images saved and can see if I might be able to add them back in at some point. I’m also still planning on archiving the non-Jackson posts, as well.

Posts by Other Users

In addition to Jackson, Ghouli.net had other contributors. Here are some of the other official posts by other users.